There are less than 24-hours until the 2019 Isle of Man TT begins and the excitement levels are building.

Usually, the Grandstand is a barren, mushy-looking field with some concrete patches. The flags and banners are nowhere to be seen and the Grandstand just becomes that normal building you drive past. Pit lane is forgotten, the timing boards bare. Doesn’t sound like that usual Grandstand everyone knows and loves, right? It takes months of back-office preparation to ensure the logistics of the two weeks are finely tuned. It takes weeks to paint the black and white curb stones on corners of the public roads, erect the air fences around specific parts of the course and to tie hay bales around gate posts and the like, but it’s almost time.

I get a little giddy when it’s time for the North West 200. A) The racing is absolutely amazing there, who doesn’t love road racing? B) When it finishes the majority of the larger teams ship themselves straight over that evening or the next day to the Isle of Man and overnight the Grandstand becomes the place to be. It might not be that magical first practice session we’re all eagerly awaiting, but it’s certainly the start of what’s to come. The flags reappear on the top of the Grandstand, banners are pinned to the recticels with Monster Energy and Bennetts lining the lampposts. Then, the race trucks pitch up in all their glory putting our little Manx puddle-jumpers to shame. Huge motorhomes roll off the Ben-My-Chree, vans filled with race bikes, spanners and beer. They all start to appear and suddenly that barren, mushy-looking field becomes one of the best paddocks you could wish for – a road racing paddock. 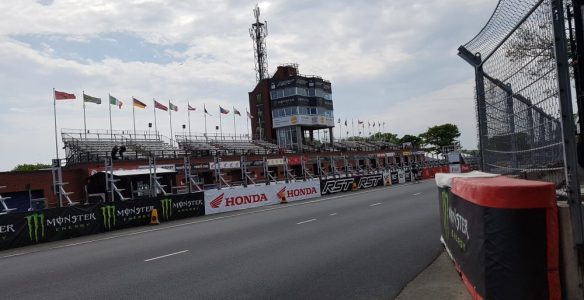 The Grandstand with all it’s flags ready to race.

A road racing paddock is one of the friendliest places you could ever walk into. I’ve never been able to put my finger on why this is, but I strongly believe it’s because the road racing community are a family. We all know how dangerous road racing can be, we all know someone who’s been bitten by the Mountain course or worse. Yet year on year the same racers, teams & spectators come back because it’s what they do, it’s what they love, it’s in their blood. Road racing is a bug.

Teams help fellow teams, riders help fellow riders… yet when the visor comes down as they await the tap on their shoulder to fly down Bray Hill they become rivals who are all competing for the same reason – that top step and a prestigious TT victory.

The 2019 Isle of Man TT begins tomorrow. Curb stones line the way, stone walls, lampposts, electricity boxes, pavements, trees and bridges not to mention roundabouts, tram lines and hairpins to contend with as well as the ever-changing weather. There are arguably 216 corners to negotiate around the 37.73 mile course which is primarily a public road for 365 days a year. You know the drill, it’s time to go road racing!

Below is the qualifying schedule, but it is subject to change as we all know due to weather and other circumstances beyond anyone’s control. It’s currently raining on the island, which is just bloody typical, but here’s hoping the weather forecast for tomorrow is wrong else we won’t be seeing anything…!

As always, it’s the newcomers’ speed controlled lap – first the solo’s, then the sidecars. No, that doesn’t mean they’re confined to 50mph the entire way, more in the 100mph+ figures. This is usually led by either a current or former TT racer. Richard ‘Milky’ Quayle often slides back into his leathers to lead a pack, possibly Steve Plater and rounded off by a Travelling Marshal. It must be such a daunting lap. Imagine spending months watching on-board laps, driving around the course seven-million-times, processing all the corner information, remembering where drain covers are, braking markers, riding the course in your head 24/7 and then on top of all that racing round other tracks to ensure you have enough signatures for your Mountain Course Licence. Information overload. That first-ever closed road lap must be mind-boggling; they are literally living the dream. I find it’s great for those who marshal to have a speed controlled lap first too just so you can keep that spare pair of underwear for a couple of hours longer… I’m pretty sure the newcomers will need a new set before they reach Ballacraine mind.

Following the speed controlled lap, we are given the chance to allow our eyes to adjust to the phenomenal speeds of the Superbikes as they’re kept confined to their tents until Monday. The Lightweight and Supersport machines are allowed out of the blocks first as well as the Newcomers on any machinery. Superbike or supersport, it still doesn’t prepare you for the bull that is Michael Dunlop to fly down Barregarrow and scare the shit out of you. Every year I am left speechless. I watch in awe not quite believing what I’m actually seeing. I believe that usually no times during the first practice count towards qualifying times. Let’s not forget that most of the racers may not have raced here since the 2018 TT… The road can change quite significantly during that time too – the camber, new surfaces, new tree roots unsettling the road. It’s vital to allow a brief bit of time to re-adjust to the differences, tinker with the bike’s initial settings and refresh your mind of the Mountain Course. The first night of practice is exhilarating. You swear multiple times, you take a few steps back, but most importantly it hooks you all over again. It reminds you that although it looks superhuman what these racers are doing… they really are human, just a little bonkers with a shit-load of talent, so make sure you find yourself a hedge to watch from! 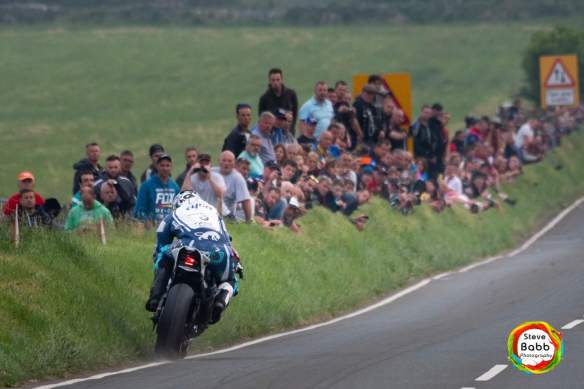 When the roads are open you should definitely head down to the Grandstand. It’s completely free for you to walk around. Take it alllllllllll in because it’s the closest you could ever get to the pre-race action. You’ll get to see inside the top team’s tents – race bikes being worked on by the mechanics, you might even get chance to speak with a racer. Also, please make sure you visit the privateer teams. They may only have small pitches, but they’ve put their heart and soul into getting themselves race ready for the TT and I tell you what, it isn’t easy!! It takes a lot of time, effort and money. They deserve as much attention as the front runners because remember, everyone has to start somewhere! You get to see every type of set-up, but you can’t beat the famous race bike in the back of a van set-up. The road racing paddock isn’t shut off like MotoGP, racers don’t tend to hide away and everyone is welcomed into this crazy little community. You’ll see kiddies racing round on balance bikes, big kids racing round on Honda Grom’s. It’s just an amazing place to be, it buzzes with the sound of bikes. They’ll be race bikes on the dyno, families frantically cleaning leathers and polishing their outfits. It’s a family affair.

There are also lots of other different things to see and, although it can get a bit crowded, there’s no better place to be. There’s a beer tent (because everyone loves beer, I think there’s even two now), an ice-cream van (because it’s always hot on this island…), hot and cold food and so much more. To get you closer to the action you will also find companies like Dunlop Tyres behind the grandstand with tyres labelled with racers names as well as the Arai shop who provide helmet servicing, visors and much more to both the racers and the public. There are clothing stores: RST, Red Torpedo and official Isle of Man TT merchandise. You can find anything from helmets to boots, leathers to hoodies. You name it, it’ll probably be behind the Grandstand! It all gets a little crazy before practice and insanely crazy before race days, but the atmsophere is electric and if you’ve never been to the Grandstand on a race day you are most definitely missing out.

I can’t even begin to imagine how exhausting yet exhilarating it must be having the throttle pinned for 37.73 miles, arguably 216 corners for approx. 18 mins… and then doing that SIX times with a lap average of 135mph on two wheels, but we’re about to find out once again.

It’s almost time to take on the Mountain Course, we’re all geared up ready to go.

As a side note, local company SMP Group Ltd also has a fabulous competition where you could win two VIP Hospitality tickets for SENIOR RACE DAY! Head over to their Facebook page for more information, and don’t forget to take your picture with SMP Group’s TT Wallaby ‘Joey’ to be in with a chance of winning. 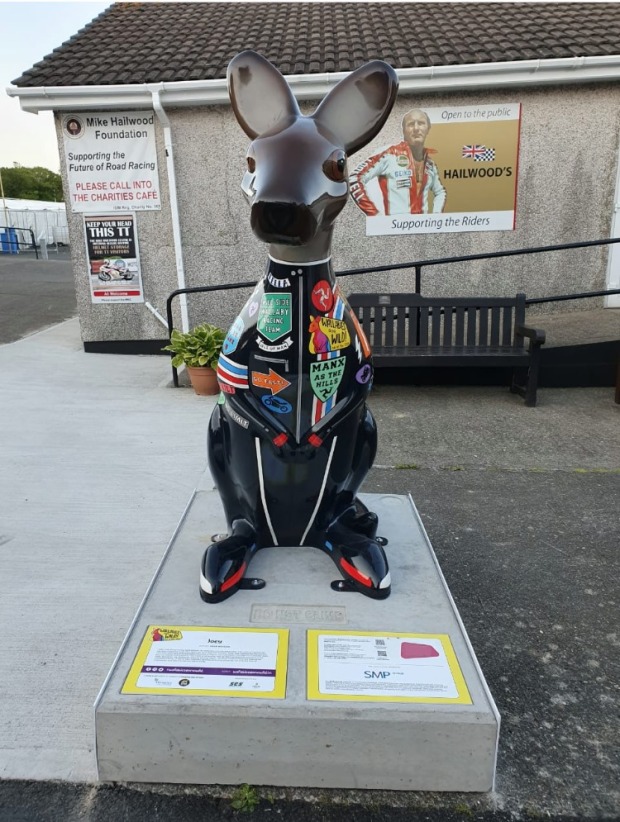